I sometimes wonder if it is worth it to have workers make buildings the way they do.

To make a house, they currently lay the floor, set the beams, and do the first layer of walls before beginning to build scaffolding. As they walls go up, the scaffolding is built higher and higher.

Sometimes I can’t help but wonder if they should just layout the floor for buildings, and make the scaffolding all the way up before focusing on the main building. That way the scaffolding itself could be considered singular separate entity that could be easier removed later.

Also, I’ve also wondered why they don’t simply bake any building created into the world. Rather, currently they are separate, and unmodifiable objects, when they could just become like ground that can be mined or destroyed and rebuilt. (I know there is some calculation of your cities worth that buildings/roads/whatever makeup).

and make the scaffolding all the way up before focusing on the main building.

They make the scaffolding layer by layer so they can actually reach the layer to be built (aside from the realistic touch)… if they’d built the scaffolding all the way up, the stairs would bring them to the top layer. What about the intermediate ones, then?

Or have I misunderstood you?

Scaffolding isn’t really something you constantly modify. It is about making platforms of which to work off of. 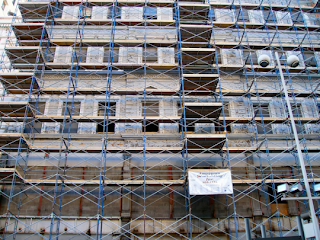 It is not overly realistic to keep climbing down and adding to scaffolding as you go, especially if the reach of a Hearthling is - if I recall 3 blocks high (The point of which they won’t build a ladder to get to it)

They are building things from a design, so they know where everything should be, and thus can focus on tasks in order to save time later.

It takes even more time with the current system for building things where each Hearthling decides what task is there’s and basically seem to earmark “This block” “This tile” for them, and that will not be done until that Hearthling does it. So you might be waiting on a Hearthling who has earmarked that piece of scaffolding.