Artificial Rivers, anything I can do in the current Alpha?

Long time avid player of Banished here, pretty much done everything I wanted to do with Banished in terms of city building and landscaping so a friend recommended Stonehearth and here I am

Having an issue with Rivers, I’ve spent (many many) hours carving a river and aqueduct (still building the arches for their aesthetic supports). This artificial river matches the same depth as the source lake (5 blocks of water, 6 depth in total). Problem is, because my hearthlings cant mine the final block layer at once, the filtering happens on a block per block basis and the best I’ve been able to get the water to flow (and at its destination) is 2 block water depth, not to mention the source lake’s water level ends up being 2 block depth as well. I tried building a wall so I could instantly delete it via console and hope that would help but the water goes right through it (built blocks do not seem to stop water).

Is there anything I can do to fix this or is there nothing I can do in the current stage of the alpha? Did a little research on here (forum) which seems to imply I cannot do anything right now but something about this may change in the next version.

Here’s a screenshot where I’ve pointed out the lake source, final waterfall and destination pond at the village. 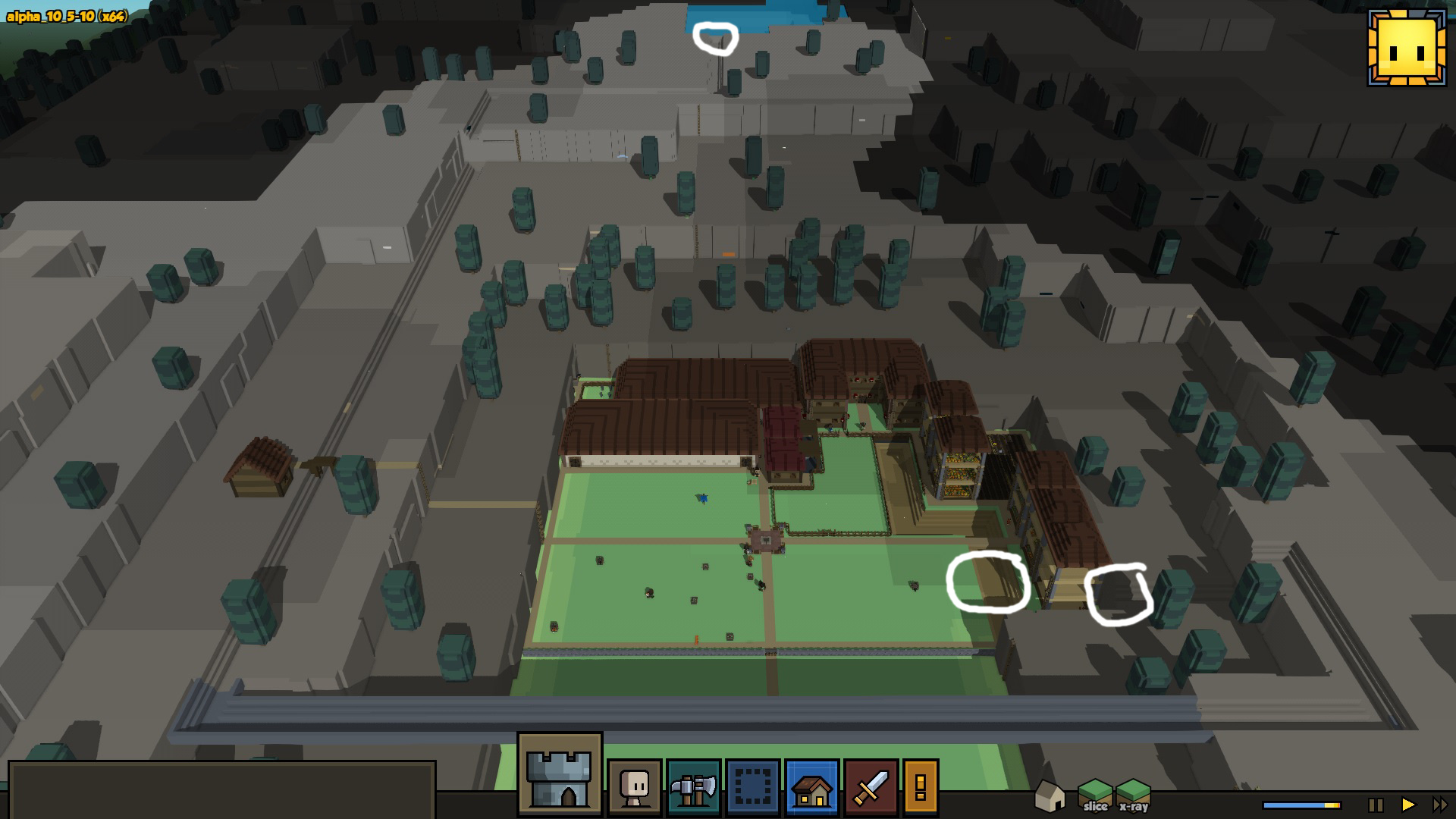 the reason for the water level lowering to only 2 blocks is that the water doesnt “magically” multiply, thus there can only ever be the same amount of water voxels as were in the original lake.

also, i embedded the photo for you.

In regards to my research on the forum pre-posting this, there where comments on that this may change in the alpha 11 or in future releases with watersprings or simply, infinite water supply, if so, that would definately solve the “issue” I have

PS: Thanks for the embed, tried doing it myself but the system does not allow new members to do so

In regards to my research on the forum pre-posting this, there where comments on that this may change in the alpha 11 or in future releases with watersprings or simply, infinite water supply, if so, that would definately solve the “issue” I have

well from what we know at the moment, “water part 2” might be held off until alpha 12. but then again, thats just what the community is saying, we havent had any input from TR yet.

[quote=“Lucielillo, post:3, topic:14246”]
tried doing it myself but the system does not allow new members to do so
[/quote]yea, that can get annoying. but its so that people cant just make fake accounts to troll/spam the forum with.

It’s definately been a while, but I’m back on Stonehearth, before I try something like this again I was wondering, was anything done in regards to the water?

Not yet they have been focusing on races, buildings, and classes/campaign stuff since Alpha 12

I’ve tried messing around fairly extensively with water in the latest release, so here’s a list of what I have and haven’t been able to do:

I have been able to convincingly link up multiple lakes and ponds on the same level, and do it without visibly diminishing the water level. The key to making this work, and hiding your work, is to use small steps and allow the water to fully equalise before opening up the next section of “river”.

I’ve also been able to run water underground from a large lake high in the mountains to a new pond on the next level down. To keep things clean, I started by digging the horizontal part of the “pipe”, and left blocks between it and the final pond location. I then dug the vertical shaft, and allowed the pipe to completely fill. I removed a single block at the bottom of the barrier, allowing the pond to fill slowly; and once the water level met up with the ground around the pond, I removed the rest of the barrier. This pond was full to the brim, but the game actually prevents rising water from overflowing its container. If you pour the water in from above then it will rise over the edge and cause a flood; but if you fill from the bottom up then your holding ponds won’t overflow (so that’s great if you’re not sure about the volume of water to be moved.)

There’s a really nice mod which adds the different terrain colours to the building palette, and I’ve used that to create some really nice level streams which look completely natural – they had the correct lightened grass borders and everything. So, if you’re just looking for a nice stream to connect two ponds, or to run to the edge of the map (the water stops and the edge and won’t “run off”), that’s quite possible.

However, getting water between the different levels is tricky if you’re going down, and virtually impossible if you want to go up. You theoretically could do it by getting all the water you want into a vertical pipe and then filling that pipe in from the bottom, forcing the water up… but you’ll have an issue with where the water originally came out of, since there’s always a fine layer of water that won’t flow away. Of course, you could build something over the top (and that means a block above the water “skin”/“puddle”); but you basically want to handle your water movement underground where possible unless you are planning to keep that stream/canal filled permanently.

Now, as for what’s not possible… pretty much everything else, unfortunately. Waterfalls are messy and impossible to control once they get going; and building a fake waterfall requires lucky placement of a lake both above and below your intended location. Oh, and just to make things more difficult, the technique for faking a waterfall only works when it’s on stone; if you try it on a dirt background it becomes immediately obvious. @micheal_handy76_mh has made some impressive fake waterfalls, but having tried to copy his technique, all I can say is that he has impressive dedication to his craft.

Running water over long distances requires a very large source, a lot of patience to make very small moves at a time, and often some trickery with filling in the bottom of the initial lake (again, do it in small sections or the water freaks out)… it can be done, but it’s the kind of thing you’ll want to test out and master in “throw away” worlds before trying it in a world you’ve built anything in that you’re fond of.

Of course, I’m hoping that the developers can spare some more time for water in the near future, and give us tools to effectively move it around (pumps, or even buckets LOL!) For the meantime, the best trick with water is to use a natural pond near where you want the water feature, and then modify it with small but “smooth” stages (i.e. once the water starts flowing, try to let it finish and equalise completely before doing anything else with it.)

just wanna add, as long as you only let water enter from one side it will fill almost right away. And resource load is minimal. i had no problems cutting out 40x40x5 this way.

but as soon as you try from more than one side on the same time it slows down.