[9.256] Topic changed: not zombie-worker, but Hearthlings not using doors bug...again

I found a bug that breaks my game.

Played not long, first night … built a house, not finished yet, set the furniture into the allready built structures and I allways see the “ghost”-models of where I placed the furniture, although I´m not in buildmode.
I enter buildmode, exit buildmode but still see the ghost-models.
I click into the world and the build-menu opens, I click at a worker and the world-Inventory opens, my worker are stuck and do nothing but poking their noses and starving.

It might be connected to:
a) building furniture inside ongoing contructionsides
b) having one bed (i.e.) in storage, but building 10 places for them (game is paused) 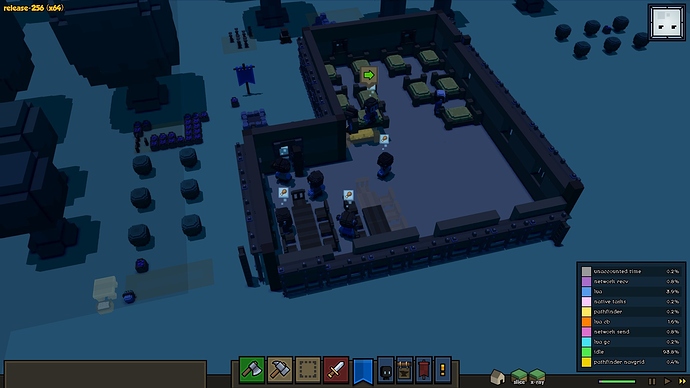 Edith says:
I was Alt+Tabbing alot… that might have broken something too???

Oops, looks like the zombie bug is back again…

I did some testing with this corrupted save:

test-result later:
(morphed to one post to not do multiposting bad boy Bassti…)

They are idle because they do not find their way through the (open) door!?!?!?

Edit Nr. 25.497:
the savegame is still saved, if you are interested in looking into it…

Edit again:
maybe the scaffolding blocks the entry/exit???
The doors open and close if a hearthling is close, but they will not go through… if I delete the ladders the workers inside are stuck…

maybe you can add a symbol for stuck hearthlings, so the player can see, ooops, “my littleone has a problem…”

I was also having some trouble placing objects in rooms - and the following helped me. Perhaps you can try this on your save that is causing issues:

I was able to resolve the issues in a few cases once the door was destroyed. When it did not, I selected the ghost bed and used the kill command to remove it. I could then try again with success.

By the look of your screenshot, seems the hearthlings got trapped inside the house because the scaffolding is blocking the exit.

But this bug from long ago, I think at some point they allowed the hearthlings to go through scaffolding to avoid this situation…

Edit: linking this here to not forget the reports are related:

I had an issue where I built a two walls and put a double doors in it to let them through, this was part of the gatehouse I built. All of a sudden when the second wall went up my Hearthlings stopped working on the other sections of the wall, since the scaffolding was on the outside of the wall. I noticed later that when I tried to order an attack team against those filthy goblins that they too refused to go through the gatehouse. When I put down ladders on both side of the wall both constructio…