The tragic tail of Maryanne Inverse

once upon a time there was a small town called “summer crossing” and for some reason that town was vary bad at hauling and restocking so a lot of items began to pile up on ground every where. one day Maryanne Inverse joined the town and shortly after that she became a footwoman after a former footman was promoted to become a bow man. the shepherd has placed the sheep feed that was suppose to feed the sheep at the same place as a bundle of wool because of that the shepherd could not open the bag of sheep feed to let the sheep eat so the sheep began to starve so the clerics wouldn’t stop healing the sheep. because there in an infinite loop of sheep healing the clerics made the entire team get no food or sleep and then strong enemies attacked and the tired group did not deal with the enemies well, the bow man and Maryanne Inverse were knocked out almost immediately and the two clerics (who were still distracted by the sheep) and the knight (mainly the knight) defeated the enemies by them selves. meanwhile a brave mason saved the bow man but it was too late for Maryanne Inverse… she died and as memorial her grave was put in the discontinued sheep pen 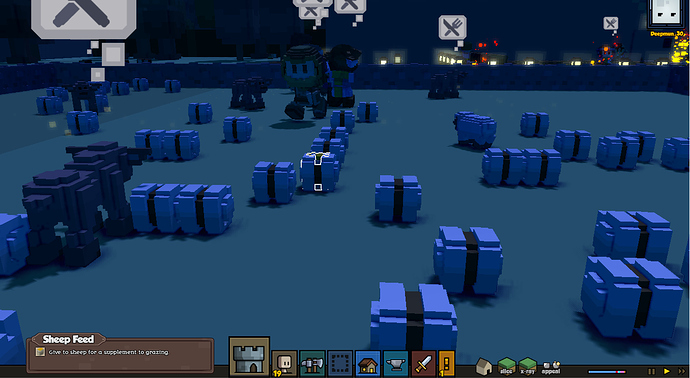 I am sorry but I can’t stop laugh at your narrative! There are so many things wrong in your save right now! Feel sad for you, but have you tried killing all of sheep? or removing the sheep area?

i did remove the sheep pen