Was testing Alpha 12 recently, everything going fine until I attempted to construct a forge and start smelting my copper ore. I was spammed with errors, presumably the trigger to stop particle effects being created or something like that failing repeatedly, started out with not many particle effects and 440 error pages, ended at 4700 (seems to be the cap?) and kept creating more and more particles, while the memory usage kept rising. The memory usage went as far as 4,314,584 K before I killed the process, and the FPS was incredibly low. I did try loading again after restarting the game, but the same thing happened the second time too. 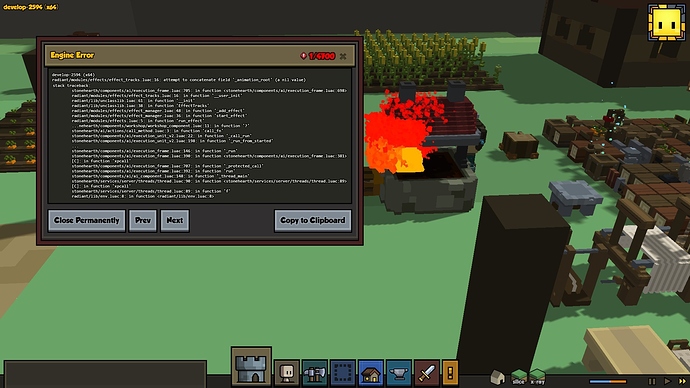 Discourse says my post is empty but I still think that quote alone should be good enough as a reply.

that quote alone should be good enough as a reply.

Yeah… That’s what I thought when I read it

Quickly, someone bring a fire extinguisher!

Well lucky you! My game crashed the instant my blacksmith tried to smelt the bars

I love the diffrent crafting tables! buuuut… When I try to craft metal ingots in the forge it crashes the game…

would be great, if they fix it…

@not_owen_wilson, are there still issues with the exploding furnace?

@not_owen_wilson, are there still issues with the exploding furnace?

I believe this was fixed.