How to protect pasture Animals from the cold in the winter?

I tried to build a somehow “shelter” for my poor freezing poyos but it seems it does not really help. They don’t have the “freezing cold” buff but they lose health. I “roofed” the whole pasture area (which looks a bit strage but i thought blocking the snow from falling on the ground could help… I tried to build buildings in which the poyos could search for shelter but they refuse to go in there…

What am I doing wrong? Is there a way to protect pasture animals from losing health in the winter? 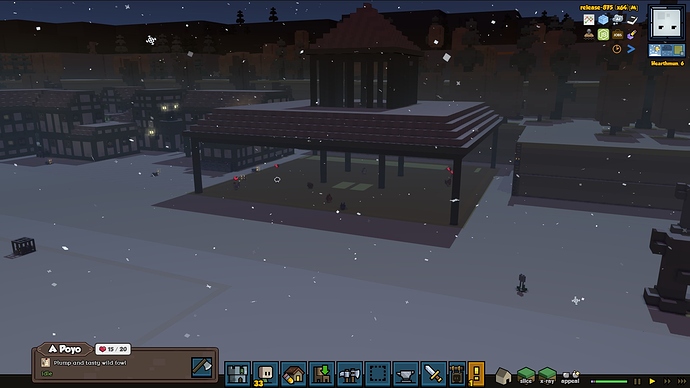 A covered pasture like that should be sufficient. If the debuff icon doesn’t appear, they shouldn’t be affected by cold. Are you sure they aren’t simply starving? If you are, please upload a savegame showing the issue.

That pasture isn’t fenced in. Those poyos might be taking steps out from under it into the cold, taking damage, and then getting chased back in by the shepherd. Put a fence around the perimeter to keep them under the shelter.

They do not leave the pasture area even if there is no fence. So fencing is not really needed. It’s an optical thing.

You’ve been lucky, then. Even with fencing and gates, my shepherded animals have gotten out and wandered all over the place. In at least two games, my shepherds had to go get them from halfway across the map.

I noticed that there is a single small 3*3 spot in the middle (where they get togehter to eat) that causes the freeze buff. this should not happen because there is a roof structure in the middle that blocks snow from falling down. The building is a base of an O. And no… I don’t let my animals starve.

Shouldn’t they have “hungry” icons over their head when they starve? 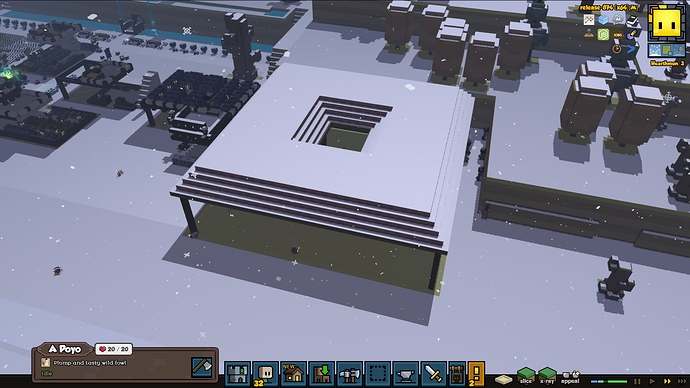 I managed to solve this problem by simply using a whole roof… but i prefer my old design.

A friend of mine that plays Stonehearth as well needs no shepherd to feed animals. they simply behave like pets and go to the kitchen to eat things.

I think that’s a bug. But a funny one.

I suppose pet works, because the sheep try to get underfoot like cats in the morning when you want your wake-up caffeine and they’re insisting that OMG you starved them all night and if you don’t feed them right now they’re going to waste away and starve to death and turn to dust before your very eyes.

I really wish they’d seek shelter automatically in the cold, but it’s probably too late for that

I agree, like a trough for shepherd animals that automatically activates a sort of “town defense” mode on days when the weather negatively affects them. It would still need to allow them to feed if they were hungry so they wouldn’t starve to death during streaks of bad weather.

I like that idea a lot. Perhaps somebody will mod it if it doesn’t come out in vanilla. Would be nice to have a coop or barn near the pasture that the animals can go in if they have negative weather effects.