Playing pretty well this morning on Intel 64bit machine. Got to day 10 (after defeating Goblin camp), then game crashed.

Tried to load most recent save game and the loading bar never went past half - then Assersion Failed.

Noticed while game was froze that there are THREE stonehearth.exes running in task manager. I only ran the game once, so it’s not multiple instances. Every time I ran the game, it shows up 3 times. Maybe this is intentional, who knows.

thanks for the confirmation @NonBritGit … [tagged]

I just got this error after trying to load the game after crashing (sudden stop) also have 3 stonehearth.exe running in the task manager.

Town has over 10 people game begins to stutter and crashes. When loading a send buffer error appears. 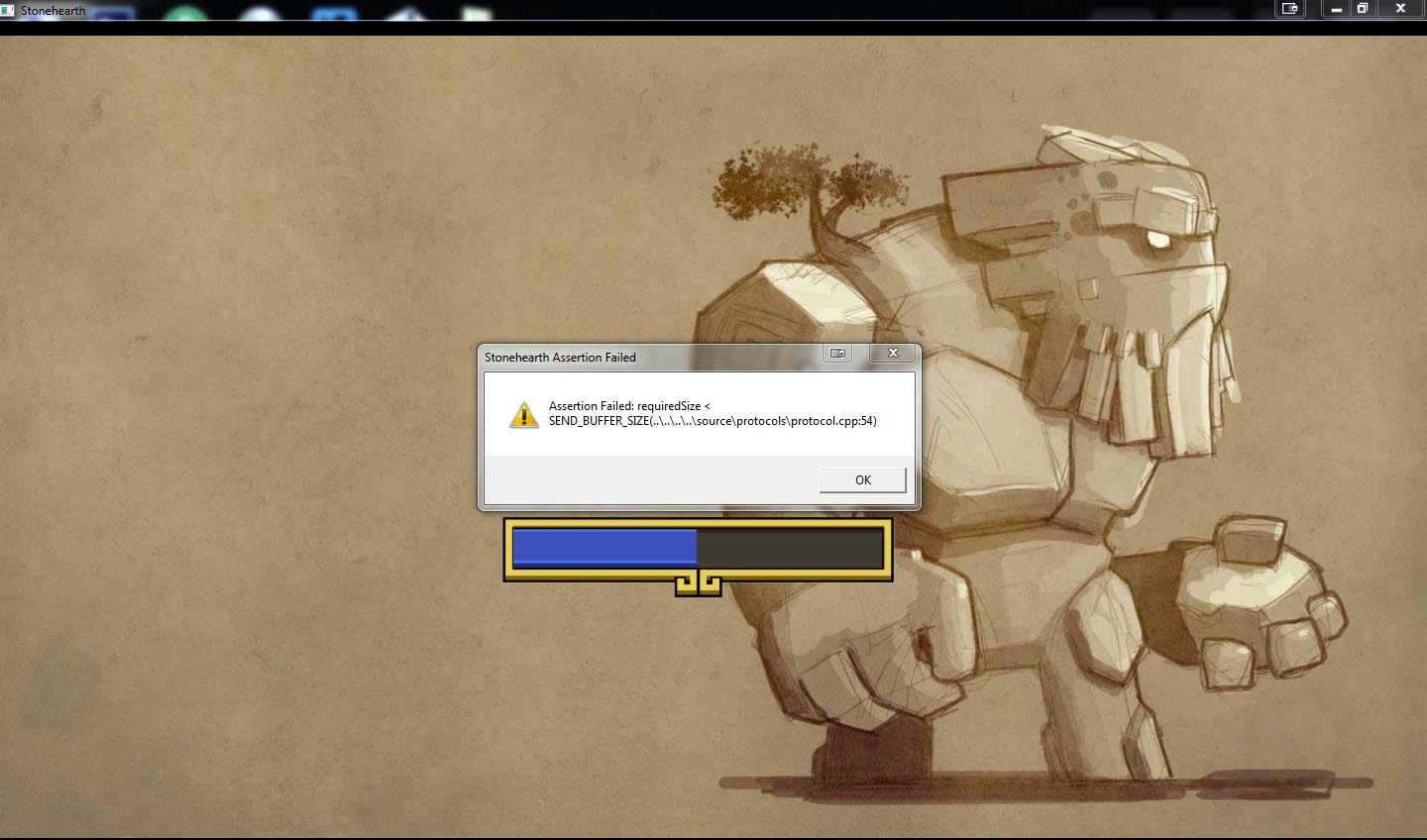 Just to ask, cause this can cause it. Did you try and build something that conflicted, you tried to erase it and or remove the build. Causing an error to pop up. Then saved to go back and erase it again?

I was moving stock piles around and mining at the same time.

Okay so no builds? Do you have a mod loaded?

Thing is if you have a conflict build that didn’t erase or remove correctly or have a mod loaded then remove that. it can cause an issue trying to bring your game back up like that.

Other thing is, if you tried to load a game after updating, that can happen too, you might have to start a new game.

Summary:
I was trying to open the carpenter’s craft window in order to tell him to create 2 new tables. When the unit was selected, his unit info UI appeared but clicking the saw icon beside his name did not bring up the screen that would let me select what I wanted him to create. Clicking on the icon didn’t produce an error, it simply failed to generate any reaction from the unit (as if the command wasn’t being registered).

Expected Results:
I expected the saved game to load

Notes:
I was playing in normal speed beacuase the game crashes when i issue more than 10 items to be palced in 2x speed. And i’m in peaceful mode. Also, i was playing more Dwarf Style building the base inside a cave instead of making buildings.

Here’s the saved game that can’t be loaded, it’s uploaded to my Gdrive, and here’s the download link:

Versions and Mods:
I’m running Stonehearth Alpha9 v0.1.0 x64 develop 2310 and have no additional mods running during this save game.

Thanks!! i hope this helps!!

Well I’ll be gawd damned. Over 10 folks and the game save won’t load. I’ve had a game going all morning and was able to save new all along (even with 11 peeps), but the second I tried to load one of those saves, CRASH. Went back and loaded a save with only 10 peeps and it loaded just fine.

Edit: just attempted to load up a 10 player game save at home on my AMD rig and the loading bar gets to about 80% before the game just… goes away… No windows crash screen, nothing.

Same with several game saves made to day on the intel 64bit machine. Could there also be a compatibility issue between 32 and 64 bit game saves? Anyway, I’m out of ideas how to keep this game running.

did you guys try reinstalling stonehearth? or if you’re using steam checking the integrity of the game cache?

It does not help. The installation was clean and working save, if you just overwrite without changes to the game, it gives an error. You can check yourself
upd: its end. I cant load overwritten game
End of Stonehearth

For a few games now, when I load a save that is after Day 8 of Dewmun it will load halfway then throw an Assertion Failed: requiredSize < SEND_BUFFER

If I load the saved game from Day 8 Dewmun, I do not get the error. But if I create a save file again after that day (doing nothing extra) and try to load it, it will give that error again. I started a new game, just in case it was something in my previous game that corrupted, and it is happenned again, cannot load saves after Day 8 of Dewmun.

Here is the log file from my most recent attempt to load the save file.
stonehearth.log (14.4 KB)

I have made it to Day 21 of Dewmun without exiting and loading the game and it plays without issue. I just need to sleep

I have 20 hearthlings and do not accept anymore beyond that.

I’m not sure where to put these reports anymore and it seems like the devs are on vacation after A9 dropped, so I’ll just drop this here.

Release 256 x 64bit on my 64bit Intel machine plays quite well and autosaves just fine (oh, buti can’t place any building on this machine - info in another thread). Quite the improvement otherwise!

My running 256 in 32bit mode on my 64bit AMD machine is the same old story though, except now I can’t get past day 5 or 6 before autosave stops working . At that point you can’t manually save (or save new) either, so it’s a dead duck on my main machine.

Last time I got this mammoth wall of errors before the game crashed.

When I tried to load my game, it threw up this error halfway loading the game, it crashed imediatley after that.

Day 7 of rainmun, 8 hearthlings and about 120 buildings and very,very limited mining.

Actual Results:
The file does not load and throws this error.

Notes:
I have been doing a lot of mining (no IM-cheating!) and the many enemies spawn but I do not engage them unless they attack me.

I haven’t tested this in alpa 15, but as soon as the official release hits steam, I will do that.

Version Number and Mods in use:
A14 - Release-524(x64)
No Mods but I did modify the Stonehearth.smod in order to get rid of the ‘Timer’ bug, when you get passed a year.