Expected Results:
Game should be at a stable FPS, ive done it before and I can get it at a full 60

As you may have guessed I have a pretty High end PC, However I should also note that as off April 11, 2017 my Drivers are up to date 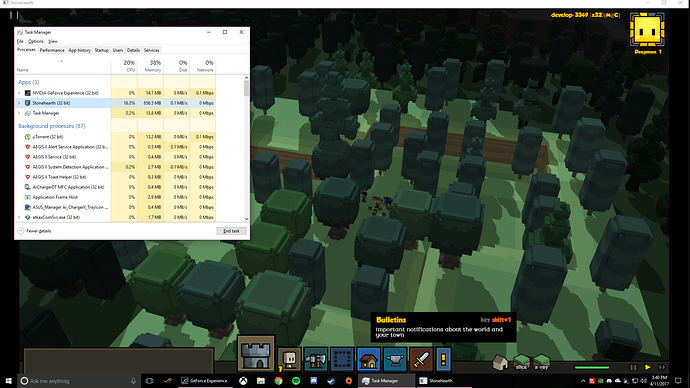 System Information:
Oh was this were I was supposed to put my Specs? oops…

You’re running the 32-bit version for some reason. Look in your user_Settings and check to make sure “force_32_bit” is set to false, not true.

Its already been marked false…

hey there @WynterDawnshade, welcome to the discourse

is this something that just came up with A21, or has it been like this with A20 and before? and is it like this every time you launch the game,or just at random?

I bought the game the other day, so I’ve never planed A20 or earlier.

HOWEVER. I’ve noticed this happens at random, most of the time i have to restart my computer to get this going at high framerates, but it mostly happens after I play a high end game like Battlefield 1 or similar.

Hey @WynterDawnshade,
It’s been some days, but have you seen that [C] next to the game version in your screenshot?
It points to a mod conflict, you might have both a smod and a plain folder of the same mod, and the game might have not updated correctly.
Verify the game cache with Steam or reinstall it, and see if it helps (you can save your other mods first, but make sure that they are compatible with A21).

Let us know if you still have this issue.