Until July 31st, 10AM PDT (5PM GMT) The Sims 2 Ultimate Collection is free to redeem! (You don’t need to own The Sims 2 to redeem it)
http://help.ea.com/en/article/how-to-get-the-sims-2-ultimate-collection/

Thank you very much! That did indeed work

whelp, I don’t play the Sims… but free is free… thanks!

Right! Also, you never know. And perhaps you can do a friend or family member a favor with it.

I now owe you one favour.

I now owe you one favour.

Always handy to have a Favour

perhaps you can do a friend or family member a favor with it.

Haha, I meant that one differently—but yes, I owe you a favor also.

As much as I hate EA, free is free.

yea, good catch. I would never have bought it, but if it is free

You know, you could say that the worst part of this whole thing is that you have to download EA’s distribution software, Origin, but after spending time with it, it’s fine. It actually seems right on par with Ste-- alright that’s too generous, but it seems alright, especially with all the free games like EA’s “On The House” promotion.

I have also heard that, although this may just be the game, that loading in the game is pure evil, like @SteveAdamo and @Newf, combined, except worse, BY A LOT!

But that is probably exaggerated by a great amount.

That brings up my second point, once you download Origin and make an Account, if you haven’t already, you will probably see an ad for the “On The House” promotion, and EA is giving out the casual, yet fun puzzle game “Peggle” for free. Wow, two free good games? EA has been pretty generous for a while now. It’s like they are an actual company.

Also, I find it nice that EA is giving a game and 18, yes, all 18 of it’s extensions for free, which if it were not, it would cost more than a few hundred dollars. Don’t forget that you’ll also have a few hundred, if not thousands of mods you can download that will keep you entertained. That’s a lot of goodies you can get for free.

#####QUICK GET THE DOCTOR! SCHEDULE AN MRI SCAN! I THINK SOMETHING IS WRONG WITH MY BRAIN!

I am not pure evil! I was just waylaid by cookies on my path of good…

I believe you, and I suppose @SteveAdamo is just a normal guy with a family, not an evil mastermind.

Hey, I downloaded the game, and it since The Sims 2 was a legacy game from 2004, it has a lot of legacy junk in it, which led to a lot of people, like me, having the game only playable in 800x600 resolution.

I have heard that to change this, all you need to do is tamper with the “Graphics Rules.sgr” file, which is incredibly fragile and important to the game, so it is easy to screw up and fck up your game, which is what I did, and it took me thirty minutes and an extra fifteen minutes of being scared shtless. to fix up my screen resolution, which had somehow made my screen resolution about 500x500, so I couldn’t see my desktop very well.

Luckily, I figured out how to fix it, but the resolution for the game was all wacked out, so I could really use some help here, and even though I could just post this on EA’s support forum, I really don’t have the time to make an account for which I will only use once.

I kind of find it stupid that EA can jumble everyone of the The Sims 2 expansion packs, as well as it’s stuff packs, yet can’t edit the code to make it work better for modern monitors. Though, I still love the game, but it’s still a huge annoyance to why the resolution is so low. I thought we left the era of 800x600 monitors a while ago.

Anyways, can anyone help me?

Anyways, can anyone help me?

Whilst right now is perhaps the best chance I will ever have at snarkily posting a “let me google that for you” link, I’ll simply just post this. 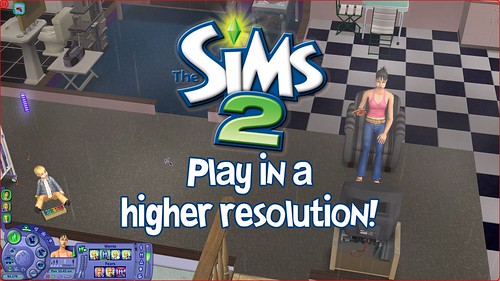 Hi everyone! With the recent release of The Sims 2 Ultimate Collection on Origin for owners of The Sims 2 Simmers have been reporting issues with their resolution being stuck at 800×600. We have written a guide for you so that you can increase...

Well, that is the one I used, but it didn’t work.

Well, that is the one I used, but it didn’t work.

Then I have no idea, that is the guide that everyone is linking to, and by all accounts it should work.