I’ve just had a look at this mod and it looks amazing, keep up the good work! 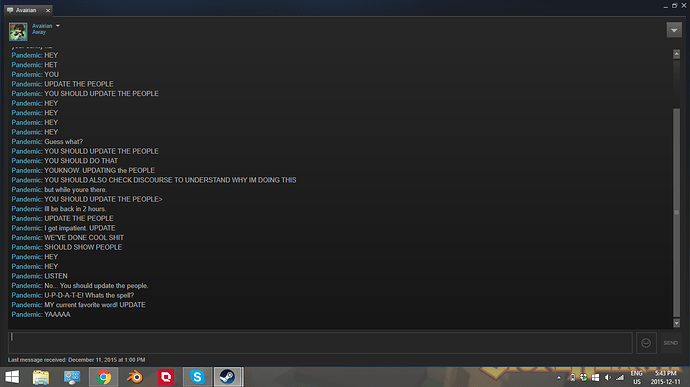 Ladies and Gentlemen!
Boys and Girls!
Hearthlings of All Ages!
Due to popular demand -cough; pandemic… I am finally here to put on a show that will wow the socks off of y’all. 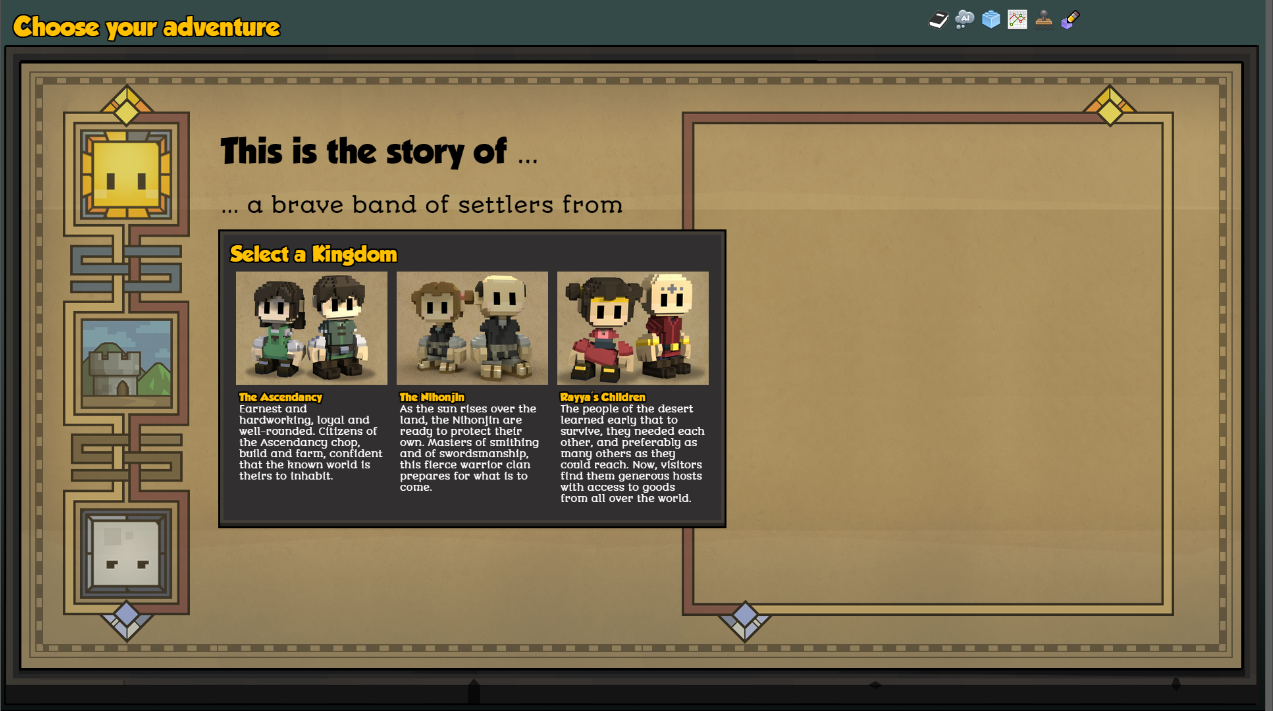 choose_your_kingdom.png1273×711 694 KB
As stated before, we are turning Nihonjin into a full blown kingdom mod. Showcased above is the rough draft of the kingdom selection render designed by @Pandemic as well as a WIP description of what the Nihonjin are really about.

Pandemic has been working hard on choosing a color palette for The Nihonjin that gives it a unique appearence while also staying true to the style of Stonehearth.

With the next image I would like to make an announcement. Please welcome @Hyrule_Symbol to the Nihonjin team! 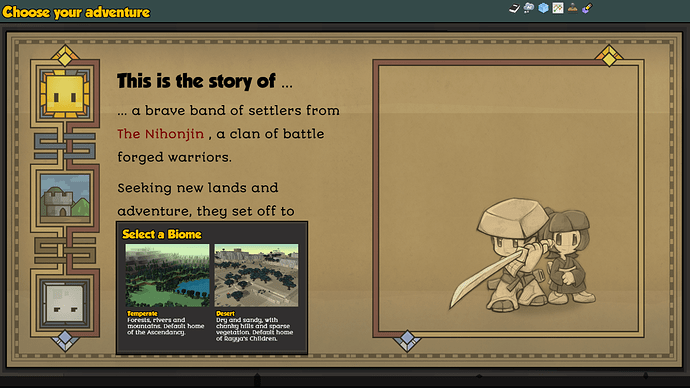 begin_your_story.png1247×703 741 KB
Hyrule did an outstanding job on drawing out the samurai and the young lady that will represent The Nihonjin in starting your journy. I am personally in awe of the drawings Hyrule is capable of and absolutely love the full colored image he has designed for the mod. Hyrule will be joining us on the team to do some of the drawings and possible some other tasks in the near future.

As you can see we are all hard at work creating more content for the release of Nihonjin. There is still quite a few rough edges but I am already really excited to see how this mod is shaping up!

I will be updating you guys more regularly at our process pandemic has threatened my life if I don’t . I hope you all are as excited as we are

i have no words to describe how excited i am about this!

welcome to the Nihonijin team @Hyrule_Symbol, i look forward to your contributions to this mod, and i must say you’ve done an amazing job of mimicking Allie’s art style!

Yay! I’m in the team! (I never considered the term but it’s actually true!)

I’m happy to help out

And i must say, this doesn’t mean I’m quitting on my own Mod, i’m kinda taking a break (which i should’ve told you guys about )

I’m kind of a helping hand for the mod, But i hope i can help make it even more awesome than the awesomeness it is!

I’ve been officially following this mod since the VERY beginning. Even though it took a while for me to post, I was following the mod fo ever! On Feb 7th I wrote [quote=“TurtleSquish, post:346, topic:2289”]
I’m still holding my breath waiting for the update

[/quote]
Unfortunately I could not complete this goal. After going broke on intravenous oxygen and after passing out several times I must confess I did give up.

That being said my excitement has not diminished in the slightest. On the contrary it has grown until now it like a dam being broke.
Keep at it! your determination is un-matched.

Are there going to be new musical pieces included with the mod? Also, how are you doing sound effects and the like for the new content?

this is really neet i look forward to it.

Ayy! @Pandemic you meanie but if it were not for you, it may of been another month or two!
#Hype!

Amazing!, i don’t want to spam however would you consider listing this on PraiseDB? - http://praisedb.x10.bz/

I am really excited for this to be completed! Though, I will wait til there is a stable release (my lappy seems to have a mind of it’s own and doesn’t play well with bugs lol).

I wish you all the good luck and I’ll be watching out for the releases!

Can we not download the mod yet? It just comes up with “Page not found 404”.

We are updating it, any downloads that were on this page would now be broken and unplayable. Hopefully we can have a fresh update soon

Unfortunately I could not complete this goal. After going broke on intravenous oxygen and after passing out several times I must confess I did give up.

That being said my excitement has not diminished in the slightest. On the contrary it has grown until now it like a dam being broke. Keep at it! your determination is un-matched.

[quote=“Atralane, post:405, topic:2289, full:true”]
Are there going to be new musical pieces included with the mod? Also, how are you doing sound effects and the like for the new content?
[/quote]
We haven’t really gotten that far to be honest lol Most things should be able to use the default Stonehearth sounds. I personally do not have the time, nor the musical skills, to develop music and off hand do not know any composers.

The semseter is finally over and I am waiting on my final grades while I deal with some other college related things. I do have a few martial things going on the rest of the month but I would like to get Nihonjin updated by the end of the year.

At the moment I am totally focused on reading Farhrenheit 451 . I’m about half way though it now and it is really messing up my head.

I absolutely love the book so far and suggest it to anyone who hasn’t read it. Soooooo I may be a bit busy with this for the next few days…

However once I digest all this I hopefully will be powering though some Nihonjin content.

I hope all is going well for everyone. I havn’t touched Nihonjin at all in the past few weeks, I have been much busier this holiday season than expected. Last weekend we had our Keiko Osame, the last class of the year, which consists of massive amounts of continuious training. I am still sore from it.

This coming weekend is Osoji, the ritual cleansing of the dojo and the reboot of training for the new year! As you can see, martial has a heavy focus at the end of the year (well the whole year).

Next semester starts up in the middle of next week, but I’m going to try to find time to set aside a few times a week to focus on the mod.

yah same for me with trying to program my story for everyone.

If your still having the problem with attaching the flags id like to make a suggestion the Horo (cloak). A horo (母衣) was a type of cloak or garment attached to the back of the armour worn by samurai on the battlefields of feudal Japan. A horo was around 1.8 m (6 ft) long and made from several strips of cloth sewn together with a fringe on the top and bottom edges. The cloth strips were sewn together and formed into a sort of bag which would fill with air like a balloon when the wearer was riding a horse. A light framework of wicker, bamboo or whale bone known as an oikago, similar to a crinoline, ...

G’mornin’. I wanted to give everyone a quick update on the progress of Nihonjin. I have a few personal things going on at the moment IRL and am going to be putting Nihonjin on hold for a few weeks or so. I must appologise for the lack of work on the mod as of late, but I have been and will contintue to brainstorm for some great ideas for the mod.

Please accept my appology and I hope everyone understands.

Thanks for checking in @Avairian

I think I can speak for most of us when I say, we understand

We really appreciate the work you’ve put in so far, and hope things smooth out enough that you can dive back in soon.