This mod more or less finishes out the incomplete and hidden task manager that I’m sure will eventually be officially in the game. The functionality is pretty basic but it does list out all of the current tasks in their respective groups. Also, each task has an icon that when clicked will move the camera around to focus on the location of that task. Most tasks display cleanly but there are some that I’m still working on such as the tilling of farms tasks and the item placement tasks. Also, I’ve added some Pause/Resume functionality based on some of the original starter code that I found. Depending on how much time I have this week I hope to have proper pause/resume functioning for all of the tasks as well as some other functionality.

You will need to add the following to your user settings to enable the hidden task manager button:

As of v0.2.0 the mod is now setup as a standalone mod. All you need to do is extract the zip into your mods folder and everything should be working. 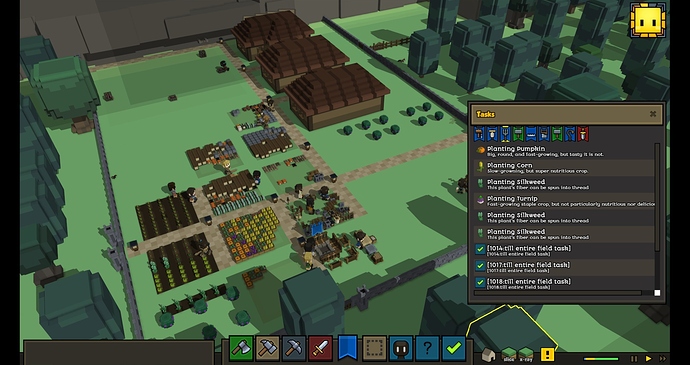 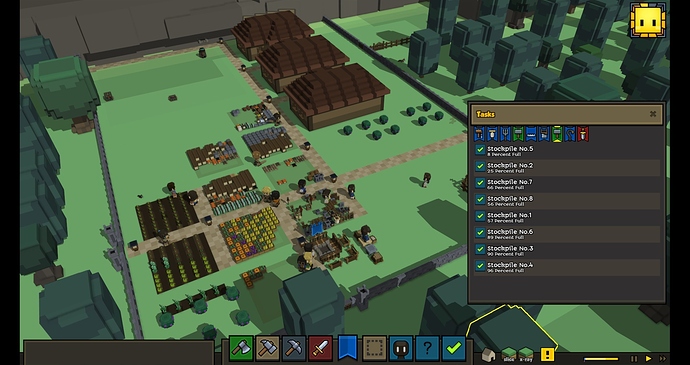 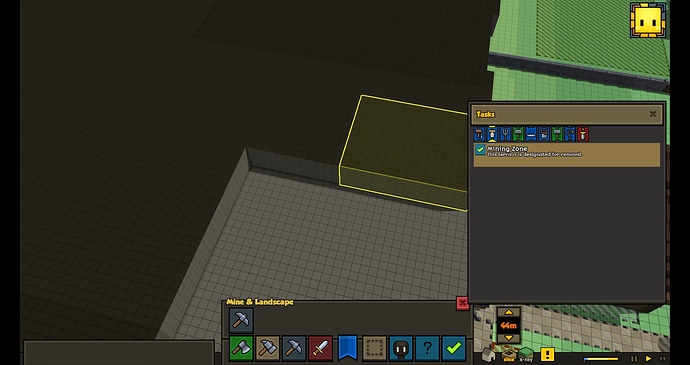 Sorry about that. Forgot to put them into the post earlier. I’ve added the screenshots now.

I saw this flag when browsing through the code the other day and turned it on. I got the new button but was disappointed to see the task manager didn’t work yet. Looks like you did a great job on this!

This mod more or less finishes out the incomplete and hidden task manager that I’m sure will eventually be officially in the game.

what more we can do beside see the task list? can we set a priority and have then do some task first than others?

I think I accidentally opened the task manager the other day by pressing a number key (8 or 9 I suppose).

In the end, it should allow us to change the priorities of the tasks, as @flpsantoss asks, but even if this mod couldn’t do that now, it’s very impressive. Good job, @chessmaster42!

I’m working on some UI elements to enable adjusting of the task priorities. Server-side LUA code has functions for changing task priority so it should be doable. Also how is it running for everyone who’s using it so far? Are the “locate task” icon buttons working? Any other suggestions or bugs? This was just one of my “let’s see what I can mod in 24h” kind of things I do when I get a new game so please let me know what’s working and what isn’t. Definitely puts a smile on my face to see people enjoying it

Also, I’m working on another mod that may or may not slow down my progress on this one. It’s a secret and it’s all “mine”. Either that “ore” I’ll put it on hold to finish up this one

Also, I’m working on another mod that may or may not slow down my progress on this one. It’s a secret and it’s all “mine”. Either that “ore” I’ll put it on hold to finish up this one

while your programming skills appear to be quite stellar, your subtly leaves much to be desired…

I’ve been working on trying to get things to change priority for most of last night and unfortunately it’s proving harder than I anticipated. I’ve got the UI elements built but the server-side calls aren’t working quite right. However, I’ve been doing some server-side coding as well on the LUA side and I’ve got the item placement tasks to show up properly and it now shows the icon of the item for the task icon and properly jumps the camera to the ghost form where the item is being placed.

I’ll post the next update once I get my new code cleaned back up and tested. It will have the UI elements for priority but I might not get them working in the next update.

As for my other mod I have decided to put it on hold for the moment while I do some research into the world generation code but I plan on posting the basic version soon.

The new version, v0.2.0, is now out and is now a standalone mod. I have also done some tweaks to the task class itself as well as the entity forms component to improve the item placement tasks. That’s about it for now but I hope to have the rest of the priority managment working in the next version.

Got it installed and love the visibility it offers. One (dumb) question. Where is the pause/resume functionality at?

Yeah I am a noob and found it when I clicked on it.

Really like the look of this, unfortunately it doesn’t work with the latest build.

If you put “show_in_progress_ui” : true, after the auto save in your user setting u can show the task manager menu button. But unfortunately it gets an error when opening it.

Yeah, it also stops all tasks when you start one.

why was this task manager not used instead of the one we ended up with?

this looks so much better if you ask me. all major tasks being performed in one place for you to look at and track.

What is the task manager we ended up with?
More specifically, how do you access it?

the task manager we ended up with is just a very barebones popup that shows generic processes. to access it double click the animated bar at the bottom right corner of the UI next to the speed buttons. it serves no purpose other than to say that your PC is getting sluggish.